Callistemon rigidus, otherwise known as the Bottlebrush Tree, is a visually appealing, flowering tree used frequently in Texas landscapes for ornamental interest. It grows between 10 and 12 feet tall and 8 feet wide with small silvery green colored evergreen leaves and vibrant red bottlebrush shaped flowers that appear in the late winter to early summer. The Bottlebrush Tree requires full sun, is drought tolerant, is suitable for xeriscaping, and is hardy mostly in South Texas throughout zones 8 to11, or from central Texas to the Gulf of Mexico.

Using the Bottlebrush Tree as a canopy ornamental tree requires maintenance, and should be pruned lightly into the new wood after it is no longer flowering. I recommend pairing this canopy ornamental with lower levels of Texas Sage, Esperanza, and ornamental grasses for a contrast in flowering colors and textures. Some similar varieties  include ‘Red Cascade’ and ‘Scarlet Torch’.

Weeping Bottlebrush (Callistemon viminalis) is a 15 to 30 foot tree with a cold hardiness of zones 9-11. As its name may hint, the foliage falls in weeping tendrils on a wide canopy creating a unique look. 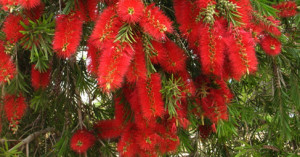