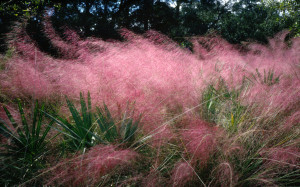 Muhlenbergia capillaris, most commonly known as Gulf Muhly, Pink Muhly, or Hair Grass, is a hardy ornamental grass native to Texas and most of the United States; however, it grows most successfully in zones 8-11.  Gulf Muhly grows only to 3 foot tall and wide, and it has a wide range of uses in the landscape. It is often used as a color accent, border, or featured in a large mass which turns into a pink cloud in fall.
This plant is often used commercially and especially in large masses because of its drought-tolerance and attractive pink blooms during the fall. It attracts butterflies, birds, and insects, is deer resistant, drought-tolerant, heat-tolerant, and can be planted in areas with poor soil which makes it a very attractive choice for a homeowner.  The best time to plant Gulf Muhly is in the early spring and in full sun.